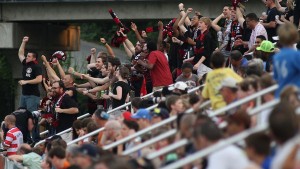 Westside 109 is the oldest supporters group still in action. They support the Atlanta Silverbacks and sit in, appropriately enough, Section 109 at Silverbacks Park. Their “theme” is drum-heavy, with several members bringing drums, cowbells, and other instruments to bang on. They do have a few chants, though, including “Willie B! FC!” which has spread to other groups.

Kurt Braunsroth, the founder of the group, wasn’t looking to form a group when he brought a drum to Atlanta Ruckus games back in the mid-90s. He just thought it was too quiet and wanted to make some noise. Said noise attracted others and history was made.

Westside 109 is also a co-founder of the Southern Derby Cup, the oldest regional cup in the United States.

As soccer became more popular, the Westside 109 numbers grew, including younger people. They brought smoke, harsher chants, and a more “European” type of fan support. After a clash with regional rival Tampa Bay Rowdies fans where a visiting fan’s flag was stolen, many of the group splintered off to form their own SG. They moved down to Section 101 of Silverbacks Park and became the Atlanta Ultras.

Since Day 1 the group has been under constant scrutiny and derision – and for the record they love every minute of it. They’ve been banned from practically every park in the southeast, including for a period Silverbacks Park, and they get complaints every single day there’s a game. One thing you can’t deny, though: they love their team and support them no matter what. 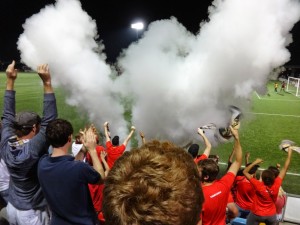 The Silverbacks Battalion, a subgroup of Terminus Legion, stands in Section 309 at Silverbacks Park.

The “new kids on the block” at Silverbacks Park, this group was a natural progression of the group that campaigned for Major League Soccer for Atlanta that formed in 2011. The announcement of the Atlanta MLS team got the whole city into a fervor for soccer and Terminus Legion was a huge part of that. Many in the group started coming to Silverbacks games in 2014, calling themselves the “Silverbacks Battalion.” They sit in Section 301.

Considering the group was formed to support Major League Soccer coming to the city, many feel Terminus Legion are simply “camping out” until the new team arrives. However, considering they stuck through the rough season the Silverbacks had last year, it’s safe to say at least some will be in for the long haul.

Not every supporters group makes the long haul. Some go by the wayside through disinterest or other reasons. Others simply see their beloved teams vanish into the wind. If we were to detail every single group that’s no longer around we’d be here all day, but here are a couple worth noting.

Atlanta Beat, the Women’s Professional Soccer team that played from 2010-2011, featured USWNT players such as Heather Mitts, Rachel Buehler, and Hope Solo. In the stands, the team had Atlanta Rhythm cheering them on with instruments and chants. Unfortunately the Beat (and the entire WPS) folded in 2012. Maybe we’ll see the Rhythm again if the Atlanta Vibe rumors are for real?

While the Facebook page is still very much around courtesy of member Don Edwards, the actual group that sat in Section 309 at Silverbacks Park only exists in name. The Eastside 309 Guerillas group was very active in 2012 with several creative chants and scathing insults aimed at opposing teams. Prior to the 2013 season long time member Danielle Rabel passed away and the group slowly dissipated throughout the year, many heading to other supporters groups. However, the group always threatens to reappear one day.

Do you belong to any supporters groups, perhaps one not listed here? Do you plan on joining Terminus Legion (or another group that may pop up) when the MLS team arrives?