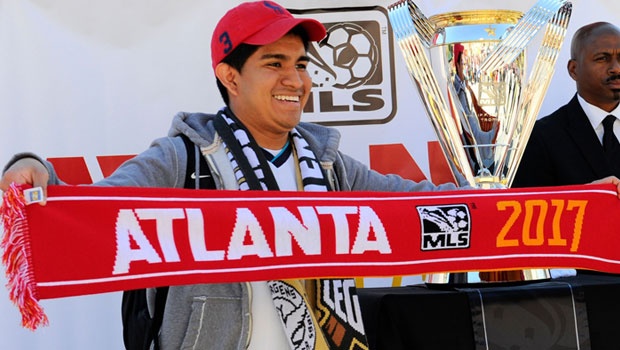 To many, this news seemed like it came out of the blue. However, this isn’t the first time Arthur Blank has expressed interest in owning a soccer team. In fact, he first talked about it back in 2004, and contacted MLS in an official capacity in 2008. While talks fell through at that time, everything fell into place this time around. 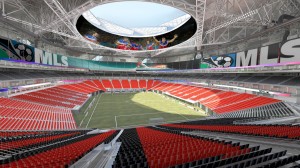 Rendering of the new Atlanta stadium

The team will play in the new $1.2 billion stadium which is scheduled to open the same year the team begins play. This stadium will also host the Atlanta Falcons, which has been a major point of contention about the team. Many feel Blank will focus all his energy on the Falcons and the soccer team will just be an afterthought.

One example of this thinking is the fact the unnamed MLS team will play in a football stadium. This is a sign, they say, of “MLS 1.0” when teams played second fiddle to NFL teams and played on fields with lines everywhere. Plus, instead of playing on grass, teams played on hard, injury-prone turf.

This is why Blank made sure to announce at the event that there will never be any football lines when the soccer team plays. How this will work is a mystery, but he assured everyone that it’s a priority that the team feels like a separate entity. However, the turf issue remains as the stadium won’t have grass for MLS games.

Another issue is stadium size. Another MLS team, the New England Revolution, play in Gillette Stadium, the same stadium where the New England Patriots play. With an average of 20,000 fans in a stadium that holds 68,000 plus, the atmosphere leaves something to be desired. The new state-of-the-art Atlanta stadium will have ways of making the atmosphere more appropriate for soccer, including bringing seats closer to the field and curtains for the upper deck…unless they’re needed, of course.

Think it’s too far-fetched the city can pack a 60,000 plus stadium for soccer? If the crowded room full of chanting, crazed fans known as Terminus Legion is any indication, it won’t be too long before “Uncle Arthur” rallies Atlanta around the newest, most exciting league in the country.

Want to get in on the action right now? $50 gets you into the “Founder’s Club” which guarantees you season tickets when it gets closer to game time. There are also further benefits which will be revealed down the road.